skip to main | skip to sidebar

When I became pregnant for the second time I was determined to “rewrite” Diego’s traumatic birth story. It had taken years for me to be able to talk about it without fighting back tears. I had felt so out of control during the experience because I had unfortunately placed all my faith in modern medicine to keep me from experiencing pain and had given up on myself and my body’s ability to do something it was specifically designed to do. I had decided that the next time I would place my trust in myself, and my body, and listen to its rhythms and cues in order to have the positive birth experience I had been unable to have the first time. This is the story of how I got nothing and everything I wanted with Sofia’s birth.
I woke up on the morning of Tuesday, September 3 (6 days after my due date) with the kind of headache that makes you certain you slept wrong. It tapered off through the morning but I was still feeling a little “off” and was taking it easy. Diego watched entirely too much television while I lay on the couch, trying to rest as much as possible with a giant belly and a rambunctious three year old.
Mike came home from the office to check on us around 5:00, just as I was getting Diego and I popsicles. After he left I stood in the kitchen and ate my popsicle. As I was eating it, I thought to myself, “I bet this will get Sofia moving in there.” Only the more I waited, the more I realized I couldn’t specifically remember the last time I had felt her move at all.


I drank some cold juice, and felt nothing. I went into the bedroom to lie on the bed and felt nothing. I moved onto my side, nothing. I tried to annoy her by pushing on where I knew her bottom was in my belly…nothing. This continued for the next 45 minutes with me becoming increasingly alarmed and in tears, constantly repeating out loud, “come on little girl, just let me know you’re okay.” Even though he would be off work in ten minutes, at 5:50 I texted Mike and told him he needed to come home right then. I’ve never been more appreciative that his office is right outside our front door.
When he got home I told him what I was feeling and that I thought we needed to go get her checked because something was wrong. We tried calling our OB/GYN in Santa Barbara where we were planning on delivering but the office was already closed. I didn’t feel comfortable making the 30 minute drive to Cottage Hospital and decided we needed to go to the closest ER.


When we got to the Labor and Delivery wing they hooked me up to the monitor and I held my breath waiting to hear her heartbeat. On the third try we heard it, loud and rhythmic. The nurse said, “It’s okay, you can cry.” But the tears of relief had already overtaken both of us.
After a few minutes on the monitor it was clear that I was having some contractions, only I had assumed that they were brought on by the stress of the situation. The nurse checked my cervix and pointed out that I was barely dilated but it was beginning to soften. The question of whether we were going to be able to leave and go to Santa Barbara if this was early labor hung in the air as the nurse began asking me to roll to my side, then the other. She pointed out that the baby didn’t seem to like it, but her tone didn’t seem super concerned.


The on call OB came in and told me that it seemed that I may be in labor, but that the baby might be in distress since her heart rate had dropped significantly when I had moved to my side. While Diego sat in a chair watching videos on my Nook, Mike began calling his family in Santa Barbara to see about getting Diego picked up in case we were staying. The OB continued that they would continue to monitor me but if she at any point felt like the baby was really in distress she would need to get her out as soon as possible and so she would need to get my consent now on a few things in case there wasn’t time for it later. There were IV’s inserted, lab work drawn, and I told Mike we should consider calling someone closer to come get Diego as the nurse asked me again to roll to one side, then the other. Before I could finish rolling back to center the door opened and the OB told us, “That’s it, I’m done, we need to go now and get her out.”
The next few minutes were a terrifying blur as they began wheeling me out to prep for surgery. The nurse told Mike after our neighbors met him and Diego in the lobby he could come back up and they would let him know where I was. It felt like less than an hour from when I had texted Mike to come home and I was about to go alone to be cut open by a stranger. My body shook uncontrollably and my eyes were filled with tears as they wheeled me into the operating room and moved me onto the table. The only relief I got was when, just before starting, the OB told them they could let Mike in, and he came to sit beside me. Mike was allowed to stand and watch them pull her out and everyone started commenting on how big she was…and the hair. I could only concentrate on the fact that I had not heard her cry. (Why wasn’t she crying, why is no one talking about the fact that she’s not crying?) Then I heard it, and again the tears fell as minutes later they brought her over and I saw her for the first time. 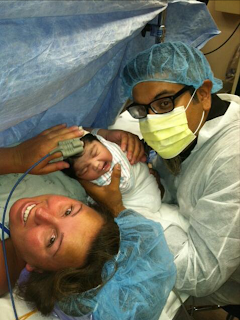 We held her for a moment and then Mike went with her to the NICU so they could continue to monitor her. I lay on the table, once again alone, regardless of the room bustling with people. I thought to myself how different this was from everything I had imagined for her birth. I thought about the Birth Wishes I had put so much care and thought into which were sitting in the hospital bag in the car. None of this was on that paper. I wanted to deliver her naturally, being present and aware of the experience. I wanted the time she entered the world to be intimate for Mike and I, having her brought immediately to my chest, where we could lie skin to skin and bond while we waited for the placenta to be delivered and cord to stop pulsing so that Mike could cut the cord… not the hurried chance he had been given to cut off what remained before they were whisked out of the room.
While I was in the recovery room, and until they brought her back to me in our post-partum room after 1:00 am, Birth Wish after Wish continued to be sacrificed: They performed every standard newborn procedure we had wished to delay, fed her formula, and gave her a first bath. By the time she came to me, I had no idea what to expect, and was solely clinging to the one thing left that I had been unsuccessful with the last time and wanted more than anything else, to breastfeed my baby. I remember Mike telling me as he handed her to me in the bed, “she’s hungry.” It was exactly what I needed to hear and I immediately brought her to my chest. When she eagerly latched on and began to drink I was overwhelmed with the realization that everything that had happened that day had brought us to that very moment and was therefore exactly what we needed.  She was my ultimate Birth Wish. 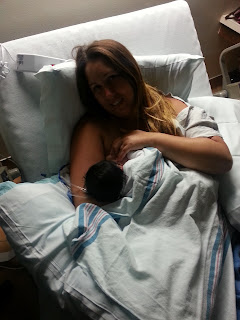 The last full day in the hospital Mike drove to Santa Barbara and picked up Diego so he could come meet his sister. We had been worried and Mike felt so guilty about the way he had left him there in the lobby with our friends and then his Tia had taken him home with them with very little explanation of what was happening. Of course neither of us will ever forget the joy on his face coming into the room to meet his sister for the very first time. 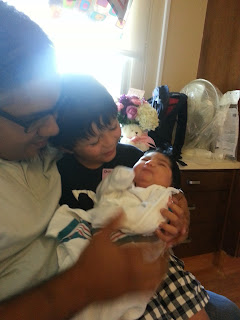 That night Mike took Diego home and Sofia and I spent our last night in the hospital together. We were lucky and the floor was busy so for the most part we were left alone by the nurses. With everything that has happened this year I had a hard time feeling like I had bonded with her while being pregnant. It’s hard to focus on the life growing inside you when everything around you seems like it’s falling apart. I couldn’t picture what she would look like without realizing that the image I had of her in the arms of her Nana might never be the same, so instead I remained distant from any image of her. But that night in the darkened room, as we snuggled and she nursed and she looked in my eyes I fell in love. It was exactly what I needed. 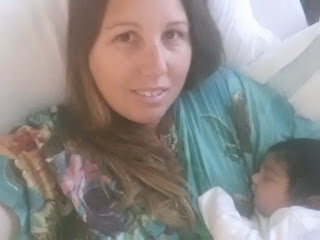 The OB told us that her cord had been wrapped tightly twice around her ankle, and it was likely that her blood supply was being cut off every time I lay on my side. With an initial APGAR score of only a four, and the amount of meconium in the uterus it was assumed that she had been in distress for quite some time. If I had not acted on my feeling and had instead went to bed she probably would not have made it through the night. 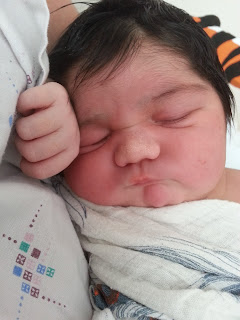 My goal for Sofia’s birth had been to trust myself and my body and that is exactly what I did.